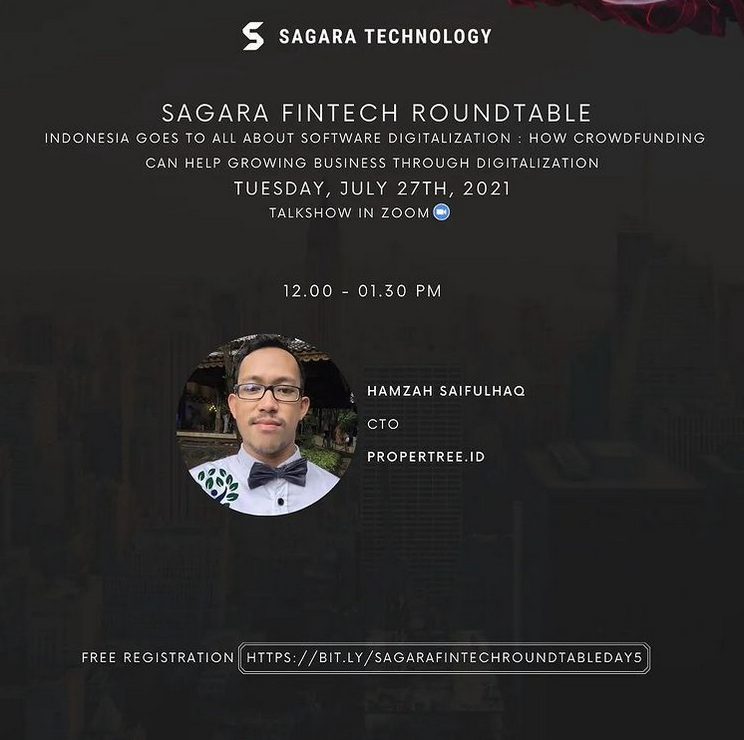 Sagara Fintech Roundtable Day 5 – Tuesday, 27th July 2021 – On this occasion, the Sagara Technology Team had the opportunity to hold a talk show with Hamzah Saifulhaq, CTO of Propertree.Id. The main discussion is to discuss about how crowdfunding can help growing business through digitalization. The following are reviews from the speaker of Sagara Fintech Roundtable.

Crowdfunding itself is a funding technique for projects or business units that involve the community at large. The concept of crowdfunding was first coined in the US in 2003 with the launch of a site called Artistshare. On the site, musicians try to find funds from their fans in order to produce a work. This initiated the emergence of other crowdfunding sites like kickstarter which was involved in funding creative industries in 2009 and Gofundme which managed the funding of various events and businesses in 2010.

In Indonesia, crowdfunding is still not very popular, but it has huge potential to become an investment fundraising instrument. Its use is relatively easy and it is internet-based so that it can be accessed by everyone.

According to Mr.Hamzah the benefit of using Propertree for partners are funds. There are also other assistance such as supervision and security. For most partners it is difficult to apply for funds because they must have material guarantees whereas usually the land is in cooperation with the government while the initial working capital is what is need by the partners, so propertree tries to provide funds that are still legal and safe.

“In the pandemic situation the effects that occur for entrepreneurs vary. Some are getting better and some are still losing. For some businesses like the health sector, it is very much needed by the community, therefore every business also needs to adjust its business strategy to suit the needs of the community. Just like in Propertree where we implemented the best strategy to support the business in times of pandemic.” said Mr.Hamzah

Weaknesses and Strengths of Crowdfunding

Before, the access to the capital market is exclusive, we must have a business account, stock exchange account. For now, the capital markets, OJK and stock exchanges encourage fintech companies to enter MSMEs for schemes that are similar investments such as business ownership or PT Publisher in MSMEs. With crowdfunding the requirement and registering is more accessible.

Mr.Hamzah said that, “For beginners, you don’t have to jump right into crowdfunding, but you can learn about investing first such as saving stocks and also participating in educational webinars on investment so that you don’t just have to depend on investments such as equity crowdfunding.”

For now, the crowdfunding role is still small when viewed from a macroeconomic perspective in Indonesia. But, it is hope that it will be able to play a better role in growing the economy in Indonesia.