SAGARA FINTECH ROUNDTABLE: Indonesia Goes All About Digitalization: The Role of P2P Lending on the Progress of Economic Growth in Indonesia 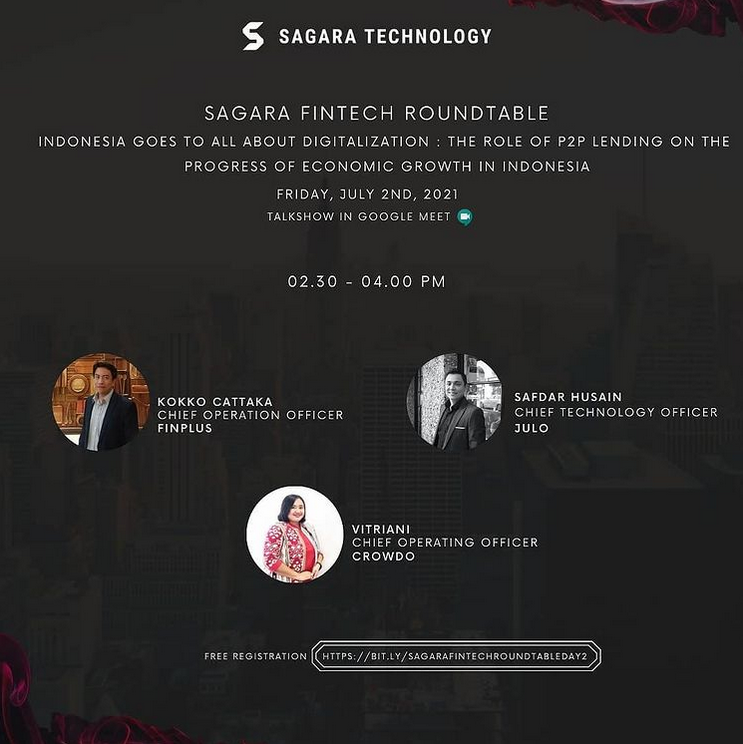 Sagara Fintech Roundtable Day 2 – Friday, July 2nd, 2021- Sagara Technology held a Talk Show on Fintech by inviting C-levels who are experts in the fields of technology development from various existing fintech companies. In this opportunity, Sagara introduces FinX the Complete Fintech Solution. The main discussion of the talk show is talking about P2P (Peer to Peer) Lending’s role in the economic growth in Indonesia. Starting about what is P2P and how it works, the condition of the companies when the pandemic hits, as well as the contribution of the Fintech companies in building the economy in the Future. The following are reviews from the speakers of Sagara Fintech Roundtable

Peer to peer is a platform that brings together lenders and borrowers, those who have funds, and those who needed funds while the Fintech company regulates. In Indonesia, especially in the fields of P2P Lending where OJK has recorded the accumulation of fintech lending which has grown very rapidly and is more than 100% based on a report in October 2020. In the May report 2021, it was recorded that there were 127 companies engaged in P2P lending.

According to Mr.Kokko, Last year the demand for loans was very high because a lot of people lost their jobs so, they needed funds for capital, to maintain business, or just pay for employees and also make a living. Last year was not a good year for Fin+ because there was a moratorium on granting new credit from March to August so there were many borrowers who can not be given loans. Fin+ feels responsible to investors who put money to manage, and participate in educating the public so that when borrowing they can be responsible, not only borrowing but also being able to return, for customers who have history or repeat orders are still being given loans because they are believed to be able to return the funds, this has to be done too for Fin+ business continuity.

In Fintech, data is very important to find out whether the borrower is credible because the company cannot see and come directly to see the borrower in person. Times are advancing, as well as the situation where a couple of years back to ask a loan from the bank one day is considered fast, but now for the process of just 1 hour, it is considered too long. To predict or verify whether the borrower is credible, Fin+ has AI as well as machine learning they, also cooperate with Dukcapil and data providers as well as credit score institutions.

“P2P is one of the digitization of a financial service, P2P is very dependent on technology because, In essence, P2P is a service that brings together borrowers and lenders directly without intermediaries, with digital technologies (alternative methods for loans)”, said Mr.Safdar.

Data is a very important component for Fintech companies. They use AI also Machine learning where machine learning is a technique of doing things on a computer where machines learn like humans (AI) by giving abstract data to the machine so that later it processes the data to produce predictions and models, from that model learning. The more data that is obtained, the more intelligent the machine AI to make predictions, with this Technology Julo growing very rapidly so that it can process loans properly regardless of the existing circumstances.

Mr.Safdar hopes that with Julo they not only providing loan money but loans that are not arbitrary and healthy (measured) also with the AI help it is hoped that it can reach people who really need it.

According to Mrs.Vitriani, the presence of fintech is an effort from technology to answer community needs in funding (tools). This is closely related to the ongoing pandemic situation where many people are starting businesses due to being laid off from work and also many businesses are falling so they need funds to change business types.

For Crowdo at the beginning of the pandemic, like other businesses, it was also a bit difficult because they prioritized the health of employees and partners. Last year’s financial condition in the 3rd quarter was quite good and healthy until the beginning of this year until 2021, the target was far from being achieved in previous years. Over time, Indonesian and worldwide businessmen have begun to adapt and be able to set strategies and be more prepared.

“To give a domino effect, we lend money to productive business people where later they can hire employees, pay employees and with their salary they can spend their money. For the macro, it will run where there will be economic growth in the market. It is hoped that with the existence of crowdo, it will not only provide financing solutions for MSMEs but also can simplify MSME business processes in Indonesia with the crowdo platform.” said, Mrs.Vitriani.