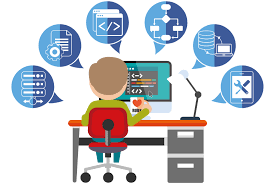 Development in connectivity and computing power, along with technology enhancements, redefines the way people interact. Even if the technology is available, not all countries have access to it. Some countries still lack focus on digital talent growth.

Not long before the pandemic happened, Indonesia has put their concern on the importance of digital talent. Not only that, but Indonesia is also focusing on investing and developing digital technology infrastructure. Without these, the digitalization process will be slow

Another stimulus to accelerate digitalization is through state-owned enterprises, businesses, and startups. Adapting technological change and using the right tech will help the process. The government is also putting effort into digital talent growth through scholarships and local startups.

The Ministry of Communication and Information or KOMINFO created a Digital Talent Scholarship to increase the number of digital talent in Indonesia. KOMINFO team up with many well-known universities in Indonesia to reach as many people as across the country.

This scholarship was first initiated in 2018 and still going until now. It is 3-months of training and it has many classes and expertise. What’s cool about this scholarship is it is free.

On the HR Tech Summit Indonesia 2021, spokesperson from KOMINFO is also present and said that the Digital Talent Scholarship is an effort to increase digital talent in Indonesia. They also stated that all classes are based on real-world needs, like digital banking. So all graduates from this scholarship can compete and perform well.

Unfortunately, the majority of these students are on Java Island. KOMINFO said that they keep improving the infrastructure and promoting this scholarship. But until then, it is still a challenge for KOMINFO and others to promote the importance of digital talent.

We can say that Indonesia has many startups and it is great for increasing digital talent. Almost every startup is going in digital directions. This is due to improving services to customers and streamlining their businesses.

Luckily, one of the Indonesian Startups is aware of this. Through their event called HR Tech Summit Indonesia 2021, Sagara Technology is ready to unleash the digital potential in Indonesia. Attended by many experts from different backgrounds, Sagara hopes that all elements can cooperate to increase Digital Talent Growth in Indonesia. To watch the full event, click here.

1 thought on “The Challenge of Digital Talent Growth in Indonesia”